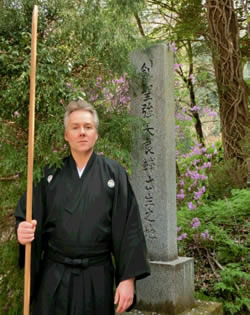 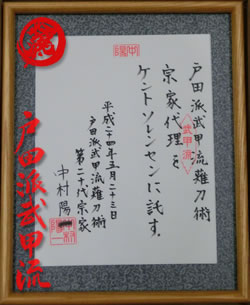 Y oichi Nakamura who was twentieth Soke of Toda-ha Bukō-ryū Naginatajutsu has passed away at the young of forty years old. Before his death, at Nakano dojo he entrusted to Kent Sorensen teacher as Soke-dairi training the next generation Soke from Japanese disciple behalf, it is declared to commit that to nominate. And he left written permit to Kent Sorensen teacher in fornt of Soke's wife and everyone disciple. (See photo)
Kent Sorensen has trained beyond the quarter-century with the introduction Toda-ha Bukō-ryū Naginatajutsu in Japan. He is based on training of nineteen generations Soke Nitta Suzuyo as Senior pupil of Soke Nakamura and senior disciple received permit as teacher from Soke Nitta . He is a formal leadership of qualified Toda-ha Bukō-ryū Naginatajutsu the only people in Japan right now.
Soke it is with the current vacancy, but dying wish of the late Soke is shown clearly, under the guidance of Soke-dairi Sorensen, our teacher of the world also think disciple of Toda-ha Bukō-ryū Naginatajutsu for one thing, we will strive to nurture the next generation of Soke in accordance with last will and testament of the late Soke, and we will continue to work and training.

Toda Seigen (also called Tomita Seigen) started the school about four hundred and thirty years ago in the vassal of Asakura family of Echizen Fukui. He learned Nakajo-ryu along with the brother Kagemasa, but because the master is master has produced the family, it came to be referred to as the Tomita-ryu unawares.
Kagemasa away Fukui serve the Maeda family of Kaga, but in order to transfer it to Kagemasa the family estate to suffer from eye, Shin-gen entered the withdrawal Buddhism in Fukui Ichijodani later, was changed to Toda characters Tomita with refrain in Soke, we suspect to have had.
The history of the Bukoryu, (there is a fine tomb lords to the Seiryuu Temple Saitama Prefecture Yorii), was told by Daifuku Gozen and two generations Soke Hojo Ujikuni after it went to Kanto. It is believed that then is transmitted from generation to generation by the defense Suneya house vassal, was developed by the wife Satoko and thirteen generations Suneya Ryosuke TakeKo. Become a mentor of Kishu house, TakeKo coached the Monjin of many holding a dojo in Edo Yotsuya. His later years, it is likely that live at the foot of the Chichibu Buko mountain, as named Bukoryu halberd surgery. 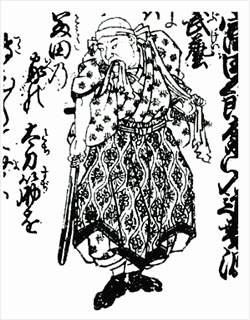 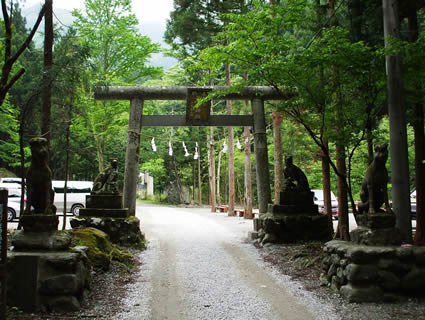 It is a martial arts armor that type instead. Few coupling halberd is characterized in the old martial arts, some eleven lines. Tachigo, Yarigo and Halberd with Kusarigama is five each. Only one, there is a halberd with a key(as below) in the whole country to the other. The other hand, five swords and five spears, this is a technique to represent Bukoryu. Use butt end effectively, severe footwork and attend the hand. 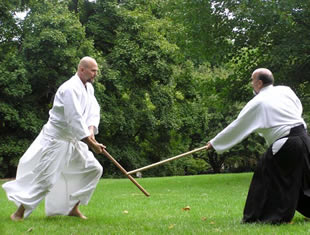 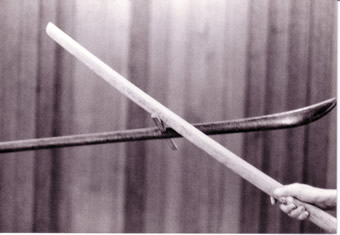